Karina Hogan has seen the justice system fail Indigenous women who experience family violence too many times: police will get called to a scene, she says, and the woman can end up being the one who is arrested.

Ms Hogan, who comes from a big Aboriginal and South Sea Islander family, is a journalist and former board member of Sisters Inside, which advocates for the rights of women in prison. She is researching homelessness and the impact of the incarceration system on Indigenous women.

Ms Hogan says police sometimes take intervention orders out against Indigenous women who are victims of family violence because they snap or behave erratically while the male perpetrator remains calm.

“This happens all the time, this happened to me,” she said. Ms Hogan believes it is critical that Aboriginal and Torres Strait Islander women have a separate First Nations national plan to reduce family violence.

“The fact that there is such an over-reliance on the carceral system is so detrimental to mob,” Ms Hogan said. “If these people actually knew and understood the experiences of Aboriginal women living with violence, then there would be investment in housing, social opportunities and building capacity of mob, especially black women.”

On Monday, an open letter to the federal government, signed by Indigenous family violence prevention and legal services, academics, community leaders and victim-survivors, calls for a truly self-determined plan – developed for and by First Nations women – that is not an “add on” to the mainstream plan.

The letter also calls for a national Aboriginal and Torres Strait Islander women’s summit to ensure community-led solutions are invested in.

“We have seen a great investment from previous plans go into putting more police into communities,” said one of the signatories to the letter, Antoinette Braybrook, who is chief executive of Aboriginal and Torres Strait Island family violence prevention and legal service Djirra and co-chair of the National Family Violence and Legal Services Forum and Change the Record.

“And that’s not the solution that’s needed, because of the fear and the lack of trust of white authorities, the police. Also, we’ve seen an investment into mainstream services over Aboriginal specialist family violence services.”

‘Nobody listens to us’: Indigenous women call for separate domestic violence plan

Women’s Safety Minister Anne Ruston (pictured below) said she had heard the message “loud and clear” at the summit on the need for a standalone action plan to end violence against Aboriginal and Torres Strait Islander women and children.

“This doesn’t mean that the next national plan will be silent on these issues, nor should it. But equally, we understand that to create real change and end violence against Aboriginal and Torres Strait Islander women, there needs to be a dedicated, self-determined plan to do it.” 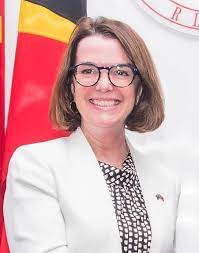 Senator Ruston said the 13-member Aboriginal and Torres Strait Islander Advisory Council would lead the development of the action plan.

But Ms Braybrook said there was concern the action plan would be a subset of the mainstream national plan, and that the National Plan Advisory Group and Aboriginal and Torres Strait Islander Advisory Council had been hand-picked by the government.

“I am not saying they are the wrong people, but the process is flawed.”

She called for greater involvement from family violence prevention and legal services, which had expertise in working with victim-survivors.

Among the 13 members of the Aboriginal and Torres Strait Islander Advisory Council, Emily Carter, chief executive of the Marninwarntikura Women’s Resource Centre, is a member of the National Family Violence Prevention Legal Services Forum.

Another signatory to the open letter is lawyer and academic Dr Hannah McGlade, a member of the UN Permanent Forum for Indigenous Issues, who has been advocating for five years for the need for a separate national plan.

“It’s quite clear that there’s a lot of outrage at the sexual assault and violence and murders of white women, but this endemic violence against Aboriginal women goes relatively unnoticed as if black women’s lives don’t matter.”